Review of jQuery 1.4 by Karl Swedberg and Jonathon Chaffer

I recently read through the newest revision of Karl and Jonathon’s amazing jQuery reference manual, which has just been updated for the latest release of the jQuery library itself. Even though it’s a reference manual used to refer to specific methods or properties of the library rather than a teaching book that takes the reader on a journey through the API I still wanted to read through it in its entirety in order to give it a balanced review and to see how much additional information it provided. It’s great to see what resources like this offer those who wish to read through their material. Learning new skills is crucial, and whether you’re a jQuerie newbie or you’re knee-deep in the process of building a Poker site, it’s likely you’ll want to take a look. As for me, I was not new to the jQuery scene, but decided to read through it regardless. I’m already fairly competent in using jQuery so I wanted to see if there was anything new it could show me. It did – there were subtle aspects to a number of methods that I had never used before, and with the new additions to the guide added for jQuery 1.4, there was actually a lot I took away from this book. 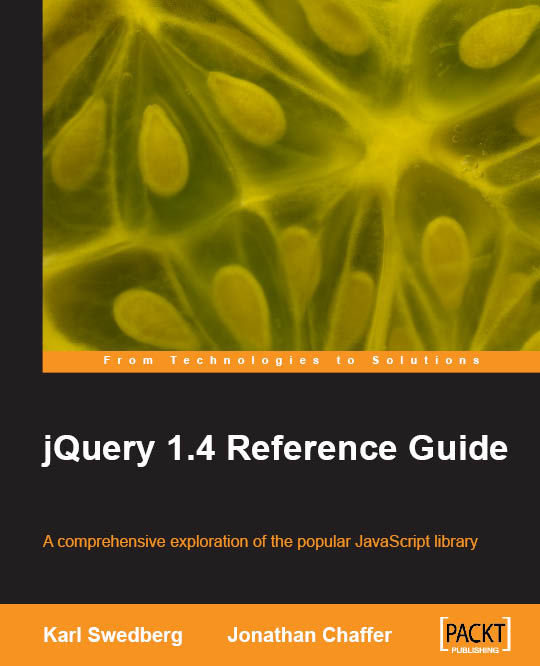 The first chapter served as a very good general introduction to jQuery and what the library is capable of. The whole chapter is dedicated to an interactive example that uses a wide variety of different jQuery methods and functionality, and the accompanying text gradually picks apart all of the code to show what it does. The example is excellent for those new to jQuery and was a very good way to start the book.

Remaining chapters look at the different types of methods that are exposed by the library; there is a chapter dedicated to DOM traversal methods, another that looks at AJAX-related methods, etc. Helpfully, the book is structured similarly to the online documentation so readers should be able to easily find the method they require information about without too much difficulty.

Towards the end of the book there are chapters that look at the miscellaneous methods such as .grep(), .unique(), etc which don’t fit neatly into any of the other categories, and the different properties of the jQuery object that can give us extra information about the environment that the library is executing in such as the .browser properties. These last chapters will be of huge importance to many developers that are familiar with some of the more common methods, but less familiar with some of these lesser-used methods and properties.

There is also a chapter dedicated to the construction of jQuery plugins; the authors didn’t have to include an entire chapter on this topic as it is sometimes seen as beyond the scope of general jQuery usage. They could have just included some basic information under the miscellaneous chapter perhaps, but they didn’t, they provided a whole chapter to it because the topic deserves a whole chapter. It’s a relatively short chapter, and the example plugins are very light, but it covers all of the essentials for plugin development such as the standard conventions, the object method and global functions, so this chapter adds a lot of value.

The book also features some potentially very useful appendices including lists of useful tools for JS developers such as code minifiers and browser development tools, information about where to find useful JavaScript, (X)HTML and CSS references as well as a complete alphabetical listing of every jQuery method and property.

Overall, I found this an excellent reference book for developers of all levels and would recommend it to anyone that was serious about jQuery development. Bear in mind that it is a reference manual opposed to a recipe-style example-based book, so the style is very concise and sometimes dry. Personally I think this was a good thing as it allowed the book to remain focused on the core topics without going off on a tangent about implementational specifics that the reader may never encounter. It’s highly accessible, very information-heavy and literally covers every single method and property found in the library. This book will stay on my desktop (my real, actual desk) for some time to come and will remain my first point of contact from now on when looking up any method of the library.

My one complaint is that some of the appendix items from previous versions of the book seem to have been removed; for example, there is an information box in one chapter which states ‘An in-depth discussion of closures can be found in Appendix C of the book Learning jQuery 1.3.’ I’m sure many people buying the 1.4 version of the book won’t already have the previous edition so this is not helpful in any way. Leaving this non-essential but related information in the book would have been far better. Sometimes however, due to the limits that are placed on page count by publishers, old, less-related information has to be removed. It’s not a massive complaint, and I can understand why the authors may have had to remove these extras to make room for information relating to all the cool new functionality of jQuery, but I think the book would have benefited from retaining this information if at all possible.